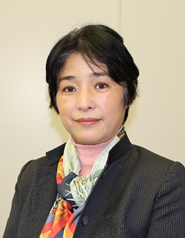 Yuuko Kawai is the General Manager for Europe for Bank of Japan, the central bank, since March 2018, in charge of research of economies and financial market/industry developments in Europe, Middle East and Africa. She joined Bank of Japan in 2003 and had served as the Head of FinTech center, Kochi branch manager, Head of Foreign Exchange Division, Chief Representative in Hong Kong and also took various roles in the Financial Markets and also in the Financial System and Bank Examination Department.

Her latest assignment before she was transferred to Europe was with the FinTech Centre, which conducts research and works as the information hub amongst practitioners, researchers and other related parties both outside of and within the Bank for FinTech related topics.

Prior to joining the Bank, she worked in JPMorgan/Chase/Chemical bank group taking various roles in the financial market division, most notably dealing dealing and structuring derivatives products, and subsequently at RPTech, an independent think tank, as a research director.

She received an MBA from the Wharton School, University of Pennsylvania and an LL.B from Kyoto University.